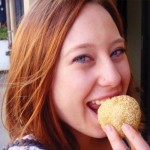 For now, check out her most recent blog post about cooking on Valentine’s Day below.

I’m one of those people who always tries to plan things meticulously, and yet I’m never surprised when it all comes crashing down on my head at the last minute in spite of all of my planning. I end up running for the bus bogged down with more groceries than I can carry, various frozen items melting, stranded outside late at night with a container of chicken soup spilling all over my backpack waiting 30 minutes for a cab because a BART train broke down (this actually happened to me on my way to house-sitting a couple days ago, I had to wash the backpack later and lost half of my soup), or missing half of class to donate blood, even though I scheduled my donation appointment an hour before class was supposed to start specifically so that I would *not* miss class.

The last was the most frustrating incident in the past week. Last time that I donated blood it was easy. It didn’t hurt much, and thanks to my tendency to bleed rivers if I get so much as a small scrape, it was over fast.

This time was different. Somehow the woman taking my donation missed the vein almost entirely. Which hurt. Then she couldn’t get the blood to flow (not surprising), so someone else was called over to help. He was not supposed to take a needle out after it had already been inserted, so his solution was to “move the needle over” and for me to tell him “if it’s unbearably painful.”

Unbearable wouldn’t quite describe it, but let’s just say it hurt like hell and I made sad little whimpering noises for a long time. Because the first person ruined the whole thing in such an epic way, they had to keep moving the needle and massaging the area to get my blood to flow at all. All in all, it took about an hour to donate a pint of blood, and I missed most of my class.

I’ll donate again. But I will make sure to tell them to be extra sure that they’re putting the needle in correctly the next time, because that whole experience really sucked.

I’m always worried, too, because I’m a little bit anemic. Lucky for me, my donation was the day after Valentine’s Day, and thanks to the dinner I had prepared for The Carnivore (I’ve decided that’s my blog nickname for my other half), I had plenty of iron in my blood.

This is my other half: 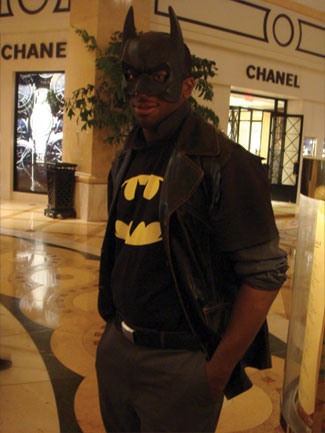 Yes, my other half is Batman.

I call him The Carnivore because I keep a 90% vegetarian diet. 90% meaning I’ll eat fish from time to time, and on rare occasions chicken or sustainably raised beef. I will eat buffalo whenever I can get it.

Little known fact: bison meat is a vegetable. If you’re me.

So between the two of us, he is the carnivore. If a meal doesn’t have an overcooked (oops – I mean “well-done”) piece of meat as the main attraction, it’s not going to satisfy him.

So last Valentine’s Day I wanted to do fondue as our dinner. It’s romantic and yummy. The trouble is, your standard gruyere + emmenthaler French-style fondue is *gasp* vegetarian, and dippers are usually bread and veggies. So I made a “German” fondue, using a hearty German beer instead of wine in the fondue itself, and Bavarian-style beer brats as one dipper option (with plenty of veggies on the side). It was a hit with The Carnivore, and I put a lot of love into it, so it was a great V-Day dinner.

But I couldn’t repeat the same thing this year. So I was scratching my head until I picked up a cookbook I received from my parents for Christmas:

This is the second cookbook of hers in my collection, and she’s still awesome. I flipped through the pages to find a recipe for Steak Involtini – little bundles of steak rolled and filled with Parmesan cheese and herbs, breaded and cooked in marinara sauce.

Definitely something for my guy.

And I knew I had to sneak a vegetable in there somewhere, so I accompanied it with my own twist on the traditional Italian prosciutto e melone – prosciutto wrapped around asparagus, with cantaloupe and fresh mozzarella.

The trouble with Valentine’s Day this year is that it was on a freaking MONDAY.

Which meant that after being at work from 8 – 1, I had to rush to campus for our weekly Art History Society meeting. On the way I stopped by the store for most of my ingredients plus some snacks for the meeting. Then I was in our meeting until 5 p.m., and stopped by another store on the way home for a meat pounder – the steak recipe required the steak to be pounded to 1/8 inch thick. At home, I put groceries away, took a shower, got dressed, and did my hair and makeup while waiting for The Carnivore to get back from grad school auditions (he came back about halfway through this process, so I ended up having a conversation with him / preparing an appetizer of spinach dip and pretzel sticks / running around like crazy with my hair half-dry. We had a nice little romantic moment on my balcony, and then…it was time to leave for the concert.

It was okay, I had planned not to have dinner until after the concert (hence the appetizer), but time was already moving way faster than I was. I finished drying my hair and we headed off to Oakland’s beautiful Fox Theater to see these people:

The concert was fantastic. They played some favorites of crazed fans like myself, and plenty from their new album as well (which is the inspiration for that super pretty tree backdrop in the pic). And you know what they say…time flies when you’re having fun.

After the concert we ran through the rain to catch a bus back to my apartment, and when we were there I started on dinner. It didn’t take an incredibly long time to cook, but when we sat down to eat I happened to look at the clock –
it was 1:45 a.m.

The only thing we could do was eat and enjoy dinner anyway. And dessert, too – which I didn’t feel the need to change, so just like last year we had a chocolate fondue with strawberries and blackberries as dippers. I did add a little flavor twist on this year’s fondue, though.

But first the food:

1. For the breading: In a small bowl, combine the bread crumbs and 1/4 cup Parmesan. Set aside.

2. For the filling: In a large bowl, mix together 1/4 cup of Parmesan, the mozzarella cheese, 1/4 cup olive oil, basil, and garlic. Season with salt and pepper to taste.

3. Cut the steaks in half crosswise and place on a work surface. Spread the mixture evenly over the steaks. Roll up the steaks and secure with skewers.

4. In a medium skillet, heat the remaining 1/4 cup of oil over medium heat. Roll the steaks in the bread crumb mixture until coated and add to the skillet. Cook the steaks until brown on all sides, about 6 to 8 minutes.

5. Add the marinara sauce to the pan. Bring the sauce to a simmer and scrape up the brown bits that cling to the bottom of the pan with a wooden spoon. Simmer, turning occasionally, for 10 to 15 minutes for medium-well.

6. Remove the skewers, place the steaks on a cutting board and slice thinly. Arrange the steak slices on plates and serve with the marinara sauce.

My side dish was much more simple:

Prosciutto-wrapped Asparagus with Melon and Mozzarella

1. Tear prosciutto into long thin strips and wrap around the asparagus.

2. Grill, or (if you don’t have a grill or it’s just plain too cold), place under a broiler for about 5 minutes, until the prosciutto is crispy and the asparagus is perfectly grilled.

3. Serve in a salad bowl with melon and mozzarella.

I know steak usually calls for red wine but I hardly ever like red wine, so we had this with dinner:

Which gave me an excuse to use some super cute glasses found in a thrift store:

And then we had dessert – fondue can be made easily with good quality chocolate and cream, and instead of serving in my giant fondue pot, I made it in a sauce-pot and served it in a bowl while it was still hot. But first I stirred in a little bit of this for flavor:

Yum. This is super thick, and so drinking it is a little…eh. It’s a great flavor but too thick for wine – kind of syrupy. I would mix it with sparkling water or champagne. But in the fondue – it was perfect.

Next time, I’ll up the raspberry factor by having fresh raspberries as dippers.

We probably didn’t finish eating until around 2:30 a.m. But it was still an awesome Valentine’s Day and meal and The Carnivore was happy. 🙂

And I had kale for breakfast the next morning…er… 6ish hours later…to make up for it. 🙂

Published in Blogs and Food

Kat is a food columnist for The Campanil, cross-posting from her food porn/cooking blog The Wine-Y Tomato. She has graduated from Mills with double major in Art History and Creative Writing in May 2011. Secretly, she'd love to have her own show on Food Network! Contact her at thewineytomato [at] gmail [dot] com. Follow her on Twitter @TheWineyTomato.