Brockhampton does not disappoint at San Francisco stop on Iridescence tour 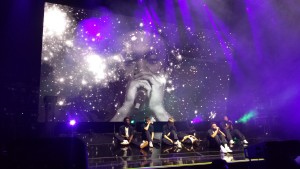 Self-described “boyband,” Brockhampton, came to the Bill Graham Civic Auditorium on Nov. 8 as part of their Iridescence tour.

“I’m gay,” chanted Kevin Abstract, the band’s de facto leader, along with the rest of the full auditorium.

Brockhampton was formed by Abstract, whose real name is Ian Simpson, in San Marcos, Texas, in 2015. The original idea for the band was born on a Kanye West fan forum, where Abstract made a post asking if anyone wanted to form a band in 2010. Since then, a few other members have joined the band. Brockhampton currently consists of 13 members.

Brockhampton’s music has been described as falling into the genres of hip-hop, pop-rap and alternative hip-hop. Currently, the band has released five studio albums. Their latest album, Iridescence, which is described as hip-hop, was released on Sept. 21, 2018.

The concert began with their poignant song WEIGHT off of Iridescence. The song is about how the band is struggling with the darker side of their newfound fame and begins with Abstract singing, “They split my world into pieces, I ain’t heard from my nieces / I’ve been feeling defeated, like I’m the worst in the boyband.”

Throughout the crowd were many people dressed in Iridescence merchandise, which quickly sold out after its release. A mosh pit formed at the front of the audience, but it was relatively small and mostly consisted of people lightly pushing each other around.

Brockhampton played a mix of songs from their new album as well as old albums, ranging from their slower songs like WEIGHT and SAN MARCOS to their faster and more upbeat songs like 1999 WILDFIRE and WHERE THE CASH AT.

The Iridescence tour is the first tour the band has gone on without former member and vocalist Ameer Vann. In May 2018, Vann was kicked out of the group due to sexual assault allegations against him. The band released a statement saying, “We do not tolerate abuse of any kind. This is not a solution to their suffering, but we hope this is a step in the right direction.”

Vann is not featured on Iridescence, who has the majority of the songs performed on this tour. When Brockhampton does perform songs with verses by Vann, they will skip his verse and play only the instrumental part of the song.

Along with Abstract’s solo career, many of Brockhampton’s lyrics are about being gay. Abstract has received criticism for rapping about being gay “too much,” which he responds to in many of his songs, saying that not enough rappers are gay.

Abstract explores the intersection of being a gay Black man in many Brockhampton songs.

While many rap and hip-hop groups and artists have heteronormative and sexist lyrics, Brockhampton is a breath of fresh air, as they tackle issues of homophobia and sexism in their lyrics. In WEIGHT, Abstract addresses how he struggled with his sexuality in high school, singing “every time she took her bra off my dick would get soft / I thought I had a problem, kept my head inside a pillow screaming.”

Throughout the concert, the Brockhampton members were continuously checking in with the crowd to make sure their fans were doing okay. Their music fosters a sense of comfort and self-acceptance in the listener, reminding us that we are not alone in our personal struggles. Their physical presence at the concert lived up to their music as they created a space where the audience members felt comfortable and validated, participating in the unapologetic group chant of the mantra “I’m gay.”

Marisa Tangeman is the current Editor in Chief for the Campanil. She has been on staff since Spring 2016. Contact her at eic@thecampanil.com.