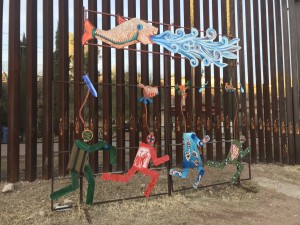 This article is the second part to a series about the immersive experience of the Mills students who traveled along the Arizona/Sonora border and the real issues that the families and children within these communities face. The writer of this piece was also involved in the trip and while opinions shared throughout the series may not represent The Campanil staff, we felt this was an important issue to report.

Nogales, Arizona is an unique border town. With 20,000 residents, it preserves a special relationship with the town on the other side of the border, Nogales, Sonora.

Although the border creates a physical boundary, people exchange goods through the openings of the wall and feel culturally connected. A predominantly Latino community, this section of the US/Mexico border region is the busiest and most traveled border in the world. Over $1 million worth of goods cross over each day. Despite this, there are still several economic issues facing the communities along the border.

Rates of immigration by unauthorized border crossing are declining. In present news coverage, President Donald Trump emphasizes many myths about the border community and spreads the notion of a migrant crisis that will negatively impact Americans. Some of those myths include immigrants being the leading cause of a lack of jobs, low wages, overcrowded hospitals and schools, heightened crime and depleting the economy.

“California’s law provides safe harbor to some of the most vicious and violent offenders on Earth,” said Trump during a White house meeting in May. He was referencing California’s sanctuary policies.

“They’re the worst laws anywhere in the world for illegal immigration,” he continued. “Part of the problem we have is that our economy is so strong that people are pouring to get into our economy, they want a piece of our economy. And that makes our job even tougher. … We want people based on merit.”

A popular myth that circulates in conservative circles is that Mexican people are coming to the United States solely to work and send money home to their families, therefore draining the economy. This is very untrue as Mexican daytime and overnight visitors spend about $7 million dollars every day in stores, restaurants, hotels and businesses located in Arizona, according to an infographic from the Arizona Town Hall website.

Another myth is that everyone coming to the Nogales border is attempting to cross it. Many people migrating to the border are looking for work because their home economy is so poor that there aren’t enough jobs for everyone. About 80 percent of people living in Nogales, Sonora are not originally from there and arrive seeking job opportunities, mostly in the maquilas (factories).

These maquilas manufacture U.S. goods and military gear at a cheaper cost of labor. Over the past three years, Mexico has produced more Secret Service uniforms and Transportation Security Administration uniforms than any other country. They also manufacture uniforms for Customs and Border Protection and Immigration and Customs Enforcement agents.

While in Nogales, Sonora, the Mills students participating on the trip met with a group of local activists for dinner. One of the activists, Christian Reeene Navarro, presented a documentary she produced called Sueño Returno. The documentary highlighted the heartbreaking stories of people attempting to cross the border because they needed asylum.

One of the women interviewed spoke about how she was trying to cross the border to look for work. Where she was from, the jobs were very poorly paid so there were not enough for everyone. She had traveled with a coyote, a person who guides people through the desert to the United States for a price, and upon climbing over the wall, she was let go. The woman fell and broke her spine and ankle. A young boy in the documentary discussed how he participated in transporting drugs in a backpack to earn money. Many other children also participate.

Children who are under eighteen years old and live in border communities, excluding San Diego county, are more likely to live in poverty.

In 2010, Mexico reported a poverty level of 52 percent, which is pretty devastating compared to the United States report that year of 15.3 percent. The North Mexico population is wealthier than Southern Mexico. North Mexico’s investment in finance centers and maquilas is what contributes to their wealth. It is not a coincidence that Southern Mexico is poor and more Indigenous. Latin America has a history of ostracizing and discriminating against Indigenous people. The United States has played a major role in the current state of Latin American countries, especially Mexico. U.S. immigration policies do not include Indigenous people, most notably, Operation Streamline.

In 2012 and 2013, border states had lower rates of employment based on private insurance. Arizona’s rate was as low as 18 percent. This affects the way healthcare is treated in these communities. Obesity and diabetes rates among border populations are higher than state rates and significantly higher than national averages.

Southern Mexico is more reliant on tourism to help their economy, rather than industrialization. It is not uncommon for Americans to travel to other countries to access cheaper healthcare. People often travel together in vans to engage in Mexico’s medical tourism. Right as you walk through the pedestrian port of entry, you can find a plaza full of dentist offices, pharmacies, and herbal stores.

As medical tourists, people are more likely to travel to Central America and South America. Mexico is one of the top countries traveled to due to its proximity and affordability. It is one of the top five medical tourism destinations in the world. Some of the top services sought out in Mexico is dentistry, vitro fertility treatments, and dermatology. In Mexico, dental care services are offered for 60 percent cheaper than in the United States and bariatric surgery services for 70 percent cheaper.

Despite the myths that the president spreads to the public, the migrant crisis is not the fact that people are crossing the border and entering the United States. History shows that immigration has proven to be good for the economy. The crisis lies in the separation and discrimination of families and children at the U.S./Mexico border and the support for “building a wall.”

Upon traveling to the border, the students were able to see for themselves that a wall already exists. The entire border stretches for 1,954 miles and the existing wall covers about 700 miles. To build a complete border wall would cost $70 billion dollars and $150 million dollars to maintain every year.

It is impossible for a physical wall to stop drug trafficking and illegal immigration as the president proclaims. Drugs will find their way around any barrier our administration builds and as the rates of unauthorized border crossings decline, rates of undocumented people overstaying their visa have risen in comparison.

Angel Fabre is the editor-in-chief of the Campanil and has been on staff since Fall 2018. Contact her at eic@thecampanil.com

More from NewsMore posts in News »